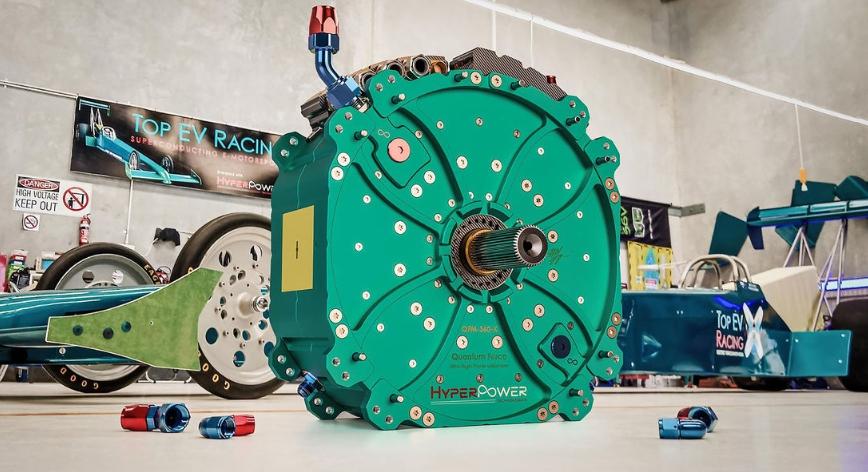 Do you want to build your own electric hypercar? Or convert your combustion engine to an electric drive? An Australian company has the right engine on offer.
Electric motors for retrofitting or for small series manufacturers who do not want to develop the technology themselves are in great demand. The British company Swindon Powertrains offers such a drive (read more here), the Americans from Electric GT even pack their electric propellants in V8 form. The British company Equipmake is currently developing a 300 hp electric machine that should only weigh ten kilograms (here you can find all the information). And this does not mean that all such new developments are mentioned.

But none of these “Electric Crate Engines” generates the power that the Quantum Force eMotor alias QFM-360-X from Hyperpower Technologies is capable of. The Australian startup promises an output of one megawatt, which corresponds to traditionally 1,360 hp. And the system should be scalable: a drive equipped with a corresponding number of QFM 360 X engines should be able to produce up to ten megawatts.

That may sound unrealistic, but Hyperpower Technologies has already gained experience in these performance regions. The company works closely with a racing team called Top EV Racing, which launches an electric dragster. Equipped with four QFM-360-X machines, the sports equipment has an output of 3.6 megawatts (4,895 hp) and is to catapult from zero to 200 km / h in 0.8 seconds. Top EV Racing is aiming for a total of eight acceleration and speed records – for this the drive technology has to function stably.

First in racing and then everywhere

Series production of the Quantum Force eMotor is currently underway, with Hyperpower Technologies initially restricting its creation to use in racing. But Michael Fragomeni, the founder and managing director of the company, is also expanding the field of application to include hypercars, aerospace and hyperloop systems, such as those driven by Tesla boss Elon Musk. In addition to the high power output, reliability and ease of maintenance are among the advantages of the Hyperpower motor.