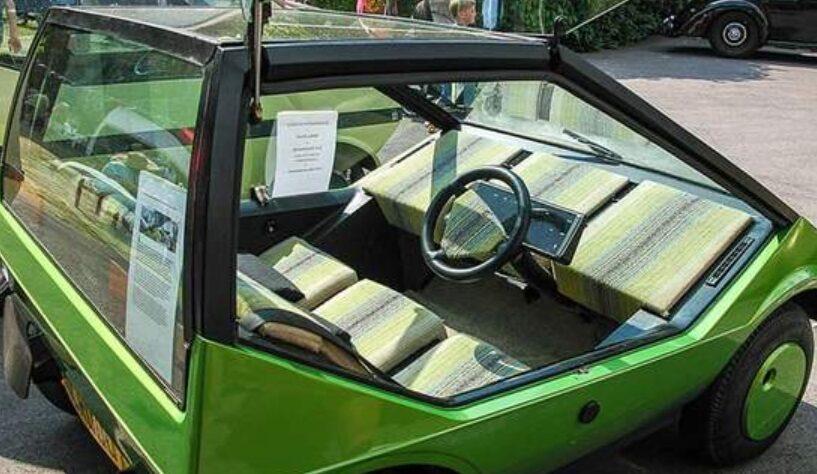 The kid, born in 1976, had a hybrid power plant – with a gasoline engine and an electric motor.

For British designer William Towns, this was not the first mini-car, but this one was the smallest, and most importantly – extremely advanced from a technical point of view.

The author of the three-seater project, William Towns, actually worked on, to put it mildly, more serious cars. For example, the mind-blowing Aston Martin Lagonda is his work, as is the Aston Martin DBS. But it was the mid-1970s, the period of the oil crisis, and the topic of economical transport was no less relevant than premium sedans and coupes for English aristocrats.

It was precisely because of the economy that a professional designer, successful and recognized in the world, individually created a project for a microcar for three people – for a typical British urban family at that time.

The car had a revolutionary power plant: an electric drive powered by batteries and a gasoline engine recharging the battery. Moreover, inexpensive lead-acid batteries were used.

Today, this type of hybrid would be called sequential. The traction motor was electric, located in front. It was powered by batteries, which in the amount of four were hidden under the seats. A gasoline engine was also mounted in front, which turned a 3.5-kilowatt generator – and the generator, in turn, charged the battery.

Unfortunately, we were unable to find out whether the battery was meant to be charged from a stationary current source (for example, a home outlet), but it seems that this was the case. For its part, the gasoline engine recharged the battery on the go, thus extending the range. The savings were achieved due to the fact that the internal combustion engine on board worked in a quiet mode that was beneficial for it, without a constant change in speed and load.

The specific technical characteristics of the Microdot hybrid have not survived to this day. But it is known that the company, which embodied the designer’s project in metal, set as its goal to obtain efficiency at the level of 2.8 l / 100 km (100 miles per 1 gallon).

In addition to the prototype with a hybrid drive, a version of the Microdot was also designed with a lightweight 400cc motor from Reliant. It was later – from 1980 – the decision of the English company Mallelieu Cars, which planned to put the car into mass production.

Despite its compact size, the Microdot was a fully functional vehicle. The removable trunk turned into a shopping trolley.

Interestingly, this largely conceptual car was really not a concept – it was created with the goal of at least small-scale production. The triple saloon was thought out from the point of view of ergonomics, and the trunk was made in the form of a box that extended from under the rear bumper. In the parking lot near the store, the driver pulled out this box, it unfolded and turned into a cart with wheels, similar to what we see in supermarkets.

After the global fuel crisis in 1974, when gasoline was sold in the UK under limits, microscopic city cars “kept in mind” even large auto corporations. They did not deal directly with them, but were interested in individual private developments, such as the brainchild of William Townes. It was important for automakers to feel the level of consumer interest in this class of economical cars, and they also probed possible technical solutions in this way.

William Townes was a genius in car design: by partially covering the electric hood with the cab, he created a stylish and harmonious image of the car. Which is very difficult with a small length of the body.

It is not surprising that the Microdot was presented at the London Motor Show in 1976, and its predecessor, the four-seater Minissima, participated in the London Auto Show in the official exposition of the British Leyland Motor Corporation, then the main British auto corporation.

But the Microdot project did not receive development. The UK stumbled out of a fuel crisis in the time-tested compact Austin Mini, and the “sequential hybrid” drive proved too exotic for the state of the art at the time. Even in a purely gasoline version, the small-scale Microdot turned out to be too expensive – from 4000 pounds, for this money you could immediately buy two Fiat-126s commensurate with it.

However, the Microdot car itself, like some other concepts of William Townes, has survived to this day. It is in the collection of the Heritage Automobile Center in Gaydon, and in 2010 it was taken to one of the retro festivals.