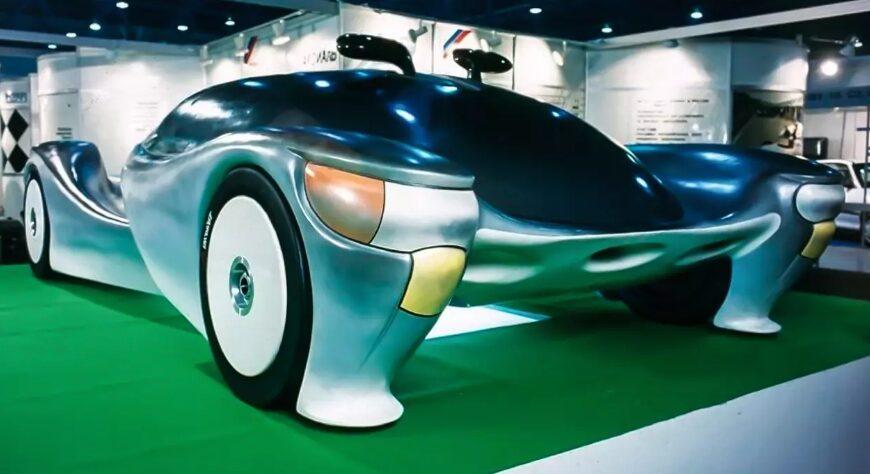 In the early 90s, news about the creation of all kinds of Russian projects of concept cars and small-scale cars fell upon the readers of auto magazines – after the poor Soviet automobile industry, the time has come for bold hopes and naive enthusiasts. But this project of a serial hypercar based on the defense technologies of the USSR looked particularly bright against the general background – the creators’ fantasies had gone too far. Let me introduce: “Extremist” is a Russian supercar with a crazy engine and advanced aerodynamics, which appeared thirty years before the extravagant Aston Martin Valkyrie and Red Bull X2010.

They showed an incredible hypercar in 1992 at the Autoindustry-92 exhibition, and you can compare its avant-garde concept with the McLaren F1 launched in the same year, which today has become the canon of the supercar and simply the most expensive car of the nineties – its price at auctions can easily exceed 20 million dollars.

The Extremist was created at the private enterprise Mart Limited with the money of an unknown wealthy philanthropist, who built relationships with former Soviet factories and tried to apply their defense technologies and production capacities in automotive production.

The defense complex then looked like a mysterious, all-powerful post-Soviet structure, which in theory could produce anything from a nuclear submarine to a titanium barbecue grill, but remained without orders.

The country now needed not tanks, but consumer goods, with which the USSR had a permanent shortage, so the administrations of the factories had to urgently look for ways to transfer them to peaceful needs.

This is how the idea came up to create the first Russian supercar based on defense technologies, which in this way could attract the attention of customers to the activities of Mart Limited.

They fantasized to the fullest: even the Extremist engine was supposed to get … a seven-cylinder! As I write these lines, the program highlights the word “seven-cylinder” as an error and suggests replacing it with “six-cylinder” – even a computer cannot seriously believe this!

The cylinders in it were arranged in a circle in a horizontal plane, as in a revolver drum. Making a stroke, the pistons in such a motor spin the power take-off shaft, which is parallel to the cylinders – a very compact cylindrical design is obtained.

You say, eccentricity, stupidity, science fiction? Firstly, engineers from NAMI were engaged in the concept of the motor – its index is AP7.2 and it actually went through sea trials on a UAZ car. Secondly, such axial motors were traditional products in the defense sector. They were used, for example, for torpedoes, where the classic internal combustion engine does not fit.

With the “Extremist” the same story came out: the standard engine did not fit in it – the creators put too radical aerodynamics into the project. The first show car in general was a full-size model for purge and aerodynamic testing.

The technical director of the project, by the way, was the famous Alexander Zakharov, who was familiar to the entire USSR from the illustrations for the last page of the magazine “Behind the wheel”. He was responsible for the design, layout and exotic aerodynamics.

In fact, Zakharov’s biography is so rich that a separate article would be required to list all his merits, starting from a candidate for the master of sports in karting in his youth to a racing mechanic or organizer of the first Russian circuit racing championship. He applied his talent to this project.

The aerodynamic concept of the “Extremist” consisted of a simple formula: a minimum of frontal air resistance plus a maximum of downforce – and without any antiwings, which in themselves create a lot of resistance.

That is why the hypercar had such an unusual shape: the Extremist did not even have a front bumper – Zakharov only limited himself to fairings that covered 17-inch wheels with aluminum alloy wheels.

From below, the air passed freely under the cockpit of the hypercar, without encountering any resistance – the front clearance was as much as 20 cm, like that of an SUV. And this is taking into account the fact that with an impressive width of two meters, the car had a height of only a meter – up to the driver’s waist.

But the main highlight was the rear of the body, which the air flowed around on the principle of an inverted wing. Due to this, the air flow under the body accelerated, creating a vacuum area – the car literally stuck to the road at speed. And in order to isolate this air flow, vortex flows were formed along the sides – the aerodynamics of a mad genius.

Here, under the cockpit, there were channels for cooling radiators, and for the intake of the engine, air was taken in through a huge air duct in the roof. Alas, the motor itself did not differ in any outstanding characteristics: 4.6 liters of volume and 180 horsepower (later NAMI brought it to 250 horses). At the same time, it did not need to be twisted strongly – the maximum return was achieved at only 3000 rpm.

What did you have to pay for an exotic aerodynamic concept? As the creators said, the car had “the minimum acceptable level of comfort.” The driver and passenger were sitting in the cockpit in a reclining position, and got there through the lifting “lantern” of the cockpit – a solution more typical of a fighter, not a car.

At the same time, a “computer control unit” was located between the driver and the passenger – something like an on-board computer. And all this inside a carbon-fiber monocoque, to which the motor subframe was attached at the back. The outer panels were also thought to be carbon fiber.

Directly in the monocoque were also niches for fuel tanks, engine cooling channels, and luggage compartments were to be equipped in front of the rear wings – two hundred liters each.

This idea was clearly spied on by the McLaren F1, for which they even had to produce a special set of travel bags – no others simply fit into such a limited space (even a golf-class hatchback can fit 350 liters of luggage in the trunk).

And here again is the influence of the defense sector: instead of the dashboard, the creators wanted to use “helmet-mounted target designation” technologies, that is, the instrument data, in theory, should have been transmitted to the visor of the hypercar pilot’s helmet, as is implemented in fighters.

At the same time, in conditions of poor visibility, an “infrared laser Doppler locator” could display data on the state of the road in front of the car – now something like this is on a lot of expensive cars.

It was noted that the implementation of the project “Extremist” can cost a “considerable investment”: half a million dollars, which is ridiculously small against the background of the launch of any other car, even without target designations on the helmet visor. But the prices in the new and hungry Russia were then really fabulously low.

After the show car was built, Mart Limited was going to start working on a running prototype and, over the next two years, create a car ready for small-scale production – in 1995, according to calculations, it could hit the roads.

Fortunately, the power of the military-industrial complex was designed for small series, but … as is the case with many other post-Soviet projects of limousines, sports cars, SUVs, everything went wrong at some point. First, as a result of the fire, all the equipment, materials and 4 vehicles of the Mart company burned down.

Following the layout of the hypercar had an accident: the truck that was carrying it overturned. And yet, the participation in the project of very serious specialists like NAMI meant that all this was serious. Zakharov himself recalls this.

One can only fantasize how impressive the running “Extremist” would look at the stand of any international car dealership – after all, nothing like this has appeared so far.