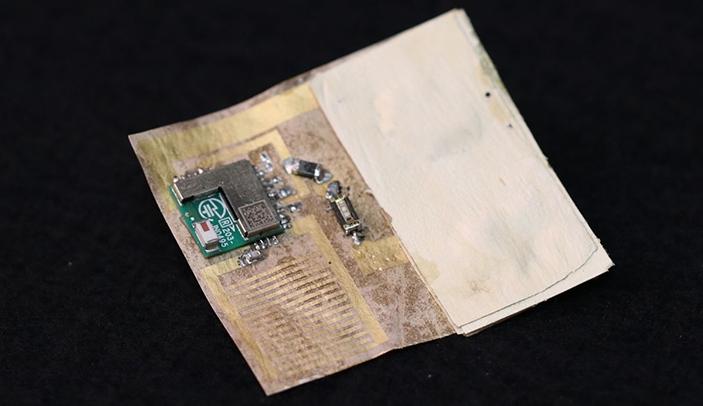 While searching for new flexible and tensile materials for electronics, a team of scientists led by Doris Danninger and Roland Pruckner at the Johannes Kepler University in Austria found that the tissues of the fungus Ganoderma lucidum, which normally grows on decaying hardwood trees in Europe and East Asia, can be used as a replacement for the substrate used in electronics.

Typically, the substrate for electrical circuits, which must isolate individual circuits and cool the electronic components placed on it, is made of non-degradable plastics. According to a research paper by Austrian scientists, mushroom mycelium has slightly less insulating power than plastic, but it also works successfully in electrical circuits, having the thickness of paper and the ability to withstand temperatures in excess of 200 ° C.

These fungi form a thin protective shell of mycelium to protect their nutrient medium – wood from other fungi and bacteria. Thus, the mushroom mycelium substrate is easily produced on the basis of wood waste, does not need additional processing, and completely decomposes within two weeks in ordinary home compost. In dry conditions, the insulating protection of the mushroom tissue substrate is maintained for a long time.

“There is a fair amount of chance in our discovery,” says Martin Kaltenbrunner, head of the university’s department of soft materials physics and co-author of the research paper. other fungi or bacteria.

The work of Austrian scientists is still experimental and far from mass production, but in the future, a biodegradable mushroom substrate can become an alternative to some types of plastics for use in electronics that do not require durable electrical circuits, such as health sensors and NFC tags for electronic devices.