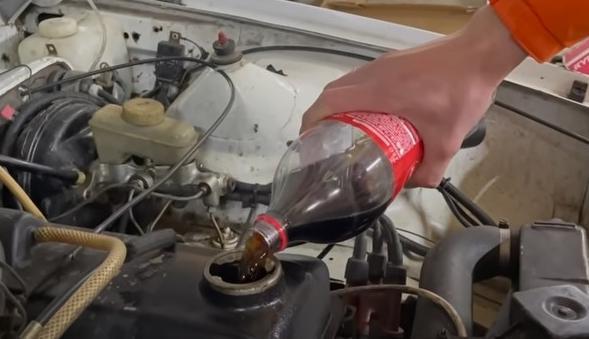 Even a relatively simple car has a rather complex structure. Not all drivers understand what and how the car is arranged under the hood.

That is why a variety of experiments with cars are very popular on the network. Today we will talk about what will happen if you try to replace the oil in the engine with another fluid.
We decided to conduct an unusual experiment in our editorial office. So, when choosing a liquid for the “replacement” of oil, it was decided to pour Cola. Our guys wondered why it was so important that the engine had exactly oil and exactly in the right amount.

To answer this question, before the start of the experiment, all the oil that was inside was completely drained from the engine, after which the necessary volume of Cola was poured inside and went for a drive. The result was not long in coming. Already after 5 minutes and 40 seconds, the connecting rod of the engine without oil broke off. So, the guys managed to prove that without a specialized oil, the engine will not be able to work in principle. Note that in similar experiments, where the engine was forced to run without oil, it also withstood about 5 minutes of intensive work.