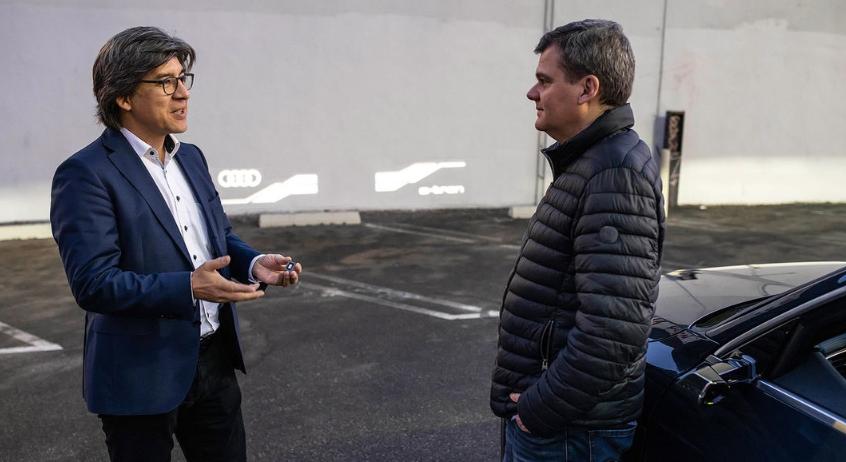 From mid-2020, Audi will offer a matrix projector in the LED headlights in its new electric SUV coupé. For example, it helps keep the lane and marks the width of the vehicle on the road. We were able to try out the Digital Matrix Light (DML) live.
At 4:45 a.m. in November there is no sign of the sun even in California’s metropolis of Los Angeles. Local wet roads show that this day should bring less light even after sunrise – it was actually raining.

Stephan Berlitz, Head of Light Innovations at Audi, has his forehead wrinkled for a moment: “Wetness reflects light, so the effect is less noticeable,” he says regretfully when we parked around 5:00 a.m. in an unattractive parking lot Meet 10 minutes from downtown. The “digital matrix light” from Audi in the E-Tron Sportback is supposed to show the “effect” while driving on the nightly highway. In the face of single-digit temperatures and the end of the night, we quickly get into the all-electric SUV coupe, which is just celebrating its world premiere at the Los Angeles Auto Show and yet looks quite standard inside, without losing sight of the interior of the normal E-Tron to distinguish.

Berlitz routinely steers the quietly and briskly moving electric car out of town. As soon as the cameras of the assistance systems detect lane markings, a subtle but easily recognizable carpet of light is visible ten meters in front of the car, which is miraculously always as wide as the lane and even curves. In it, two-line dark arrows, which in their shape are reminiscent of the brand logo of the California oil company Chevron, mark the width of the E-Tron including its camera exterior mirrors.